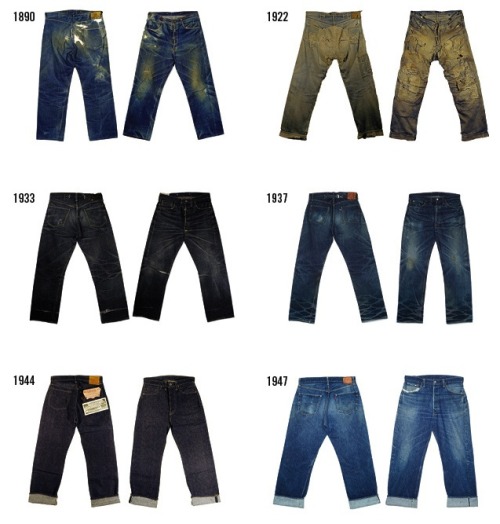 The History of Blue Jeans

Before we had low-rise, straight-leg, skinny, selvage, stretchy, resin-coated, lotion-infused, or mom jeans, there was simply jean—the fabric. The name likely originated from gênes, referring to Genoa, Italy, where sailors wore a twill blend of cotton, linen, and wool that came in a variety of stripes and colors.

Today’s jeans are made from heavier, all-cotton denim woven in a combination of indigo-dyed vertical yarn and” natural horizontal yarn, resulting in the fabric’s white-speckled surface and pale underside. And although the original name for denim came from Nîmes, France—as in, de Nîmes—the fabric was most likely first produced in England.

Once the United States emancipated itself from British rule, the former colonists stopped importing European denim and began producing it themselves from all-American cotton, picked by slaves in the South and spun, dyed, and woven in the North. The Industrial Revolution was largely fueled by the textile trade, which almost singlehandedly upheld slavery. When the cotton gin mechanized processing in 1793, prices, already subsidized by slave labor, dropped dramatically. Cheap goods drove demand, and a vicious cycle ensued. In the period between the invention of the cotton gin and the Civil War, America’s slave population shot from 700,000 to a staggering 4 million.

After the Civil War, companies like Carhartt, Eloesser-Heynemann, and OshKosh slung cotton coveralls to miners, railroad men, and factory workers. A Bavarian immigrant named Levi Strauss set up shop in San Francisco selling fabric and work-wear. Jacob Davis, an entrepreneurial Reno tailor, bought Strauss’s denim to make workingman’s pants, and added metal rivets to prevent the seams from ripping open. Davis sent two samples of his riveted pants to Strauss, and they patented the innovation together. Soon after, Davis joined Strauss in San Francisco to oversee production in a new factory. In 1890, Strauss assigned the ID number of 501 to their riveted denim “waist overalls.” The Levi’s 501 blue jean—which would become the best-selling garment in human history—was born.

Initially, jeans were proletarian western work-wear, but wealthy easterners inevitably ventured out in search of rugged cowboy authenticity. In 1928, a Vogue writer returned East from a Wyoming dude ranch with a snapshot of herself, “impossibly attired in blue jeans… and a smile that couldn’t be found on all Manhattan Island.” In June 1935, the magazine ran an article titled “Dude Dressing,” possibly one of the first fashion pieces to instruct readers in the art of DIY denim distressing: “What she does is to hurry down to the ranch store and ask for a pair of blue jeans, which she secretly floats the ensuing night in a bathtub of water—the oftener a pair of jeans is laundered, the higher its value, especially if it shrinks to the ‘high-water’ mark. Another innovation—and a most recent one, if I may judge—also goes on in the dead of night, and undoubtedly behind locked doors—an intentional rip here and there in the back of the jeans.”